H: April 4, 2016: I left the city late Friday afternoon. It was a beautiful, almost summer-like day. I actually had to turn on the AC as I maneuvered my way through some gnarly NYC rush hour traffic. I made it just in time for the Catskill Legends dinner at the Catskill Fly Fishing Center & Museum.

I joined Kelly (CFFCM president) at her table which included my fishing buddy Jessie and the Fox/Dette family. I had the pleasure of sitting next to CFFCM Hall of Fame fly tier, Mary Dette, and talking to her daughter, Linda Fox, who will be attending the Juliana's Anglers' Fly Fishing school next week with her daughter. It was a fun evening honoring Catskill legends: Tom Satterthwaite, Ray Smith, and Stan Cooper Jr.

Saturday morning, I took a short break from chores at the flygirl shack to fish my home pool for the first time this year. It was gray and drizzly as I geared up on the deck. By the time I strolled down to the river, the sun decided to peak out from behind her cloudy veil. I just stood there for a moment, soaking it all in... the beauty and tranquility... that inexplicable feeling of being back home :). I'd almost forgotten how beautiful it was. There were a few stoneflies and caddis about, but no rising fish, so I decided to swing a streamer. A few casts and some strips later I was rewarded with a beautiful rainbow.

After a quick bite, I packed up my fishing gear and headed to the museum to join Jessie at the Catskill Fly Tier's Guild Rendezvous. I texted to let her know I was on my way. About halfway there she replies that she's ready to leave and that people are starting to pack up. Bummer! I had been looking forward to watching some good tiers and meeting friends. So instead, we meet in Roscoe and head over to Dette's Trout Flies.

Linda and Mary were still there. They warmly welcomed us into their "home" and we shared a piece of Mary's delicious birthday cake. She will be turning 85! and she still loves to tie flies! We ended up staying there for well over an hour, talking, and being entertained by Indy, the new Dette fly shop mascot, a real cutie patootie (as Kelly calls him :).

It's not till well after 4 pm that Jessie and I finally hit the river. We drove to a spot on the Beaver Kill that I hadn't fished in years. As we geared up at the car, it started to hail LOL. Still we both put on blue quills, hoping we'd see some on the water. But we're a little too late for the afternoon hatch, so I change back to my lucky streamer. Several casts later, a very hungry brown trout found itself at the end of my line. We fished for about an hour before deciding to head back towards Hancock and the Delaware. 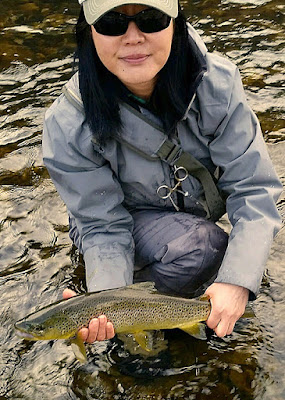 Jess goes off to check out another fishing spot on the Delaware while I run to get provisions for dinner. I get back to the shack and find Jessie fishing home pool. I'm tempted to head back down and join her but instead unload the groceries and start prepping dinner (Sam's delicious chicken with lemons, capers, and olives). With dinner underway, I look out the window to check on Jessie. I notice she's bent over and I think she's re-tightening the laces on her fishing boots. It turns out she was landing a nice big brown, breaking in her new Winston B3X rod. I'm really sorry to to have missed your first fish of the year, Jess!

We tied some flies after dinner and woke up the next morning to snow.
Posted by Hyun at 6:36 PM