H: January 19, 2014: Unfortunately there was more rain than (sun)shine during our bonefishing trip to Abaco. Nonetheless, it was a wonderful trip including 2 great days of fishing.

It was a miracle we even got to Abaco that day given the snow storm and airport closures the day before. Everyone was delayed (me at JFK; Shannon, Doug, Linda, Kat, and Rob at Newark) but somehow we all made it! It was dark when I finally arrived on the island. Anne and Ken of Abaco Lodge were kind enough to meet me at the airport, help me get my bearings, and showed me the way to the house.

The following morning, I woke up to:
Definitely worth the grueling 8 hours of travel from NYC the day before. Day 1: slept in; took a leisurely stroll along the beach; paid a visit to Abaco Lodge (which looked like a great place to stay and fish); then fished the flats in front of the house at low tide just before dusk.

The next day, I fished the Marls with Kat. The last time we fished together was on the Deschutes, our first time steelhead fishing. This was her first bonefishing trip but you never would have guessed it. Her many years of experience sight fishing for stripers off the East End of Long Island made this a cakewalk. It was a bright sunny day and she was spotting bones almost as well as our guide, David. By day's end, we both had caught our fill of bones. They were on the small side, in the 3–4 pound range, but still fun to catch. I'm glad I was there to watch her perform her first bonefish dance ;).

Some of you might be wondering how Hulk (my new 8-weight Sage TCX rod) performed? He did great but he really wasn't tested that day. Most casts were in the 30–40 ft. range. It was breezy (15-20 mph winds) but nothing out of the ordinary for a day on the flats. He definitely appreciated the 75 degree weather.

When we returned to the lodge, we were thrilled to hear that Doug, too, had caught his very first bonefish. Doug has been fly fishing for about an year now. This was his first time saltwater fly fishing and with a spanking new 8 weight (plastic still on the cork ;)! I can well imagine what he went through that day. I certainly will never forget my first day bonefishing. I was a wreck!

...best describes the days that followed. It's also the name of Shannon's signature cocktail, one of many we drank during those stormy days and nights. Drinking and eating some great meals cooked by our personal 5-star chef (Kat :), would be the primary activities enjoyed during this trip. It would be hard to top the feast we had of stone crab claws and lobster tails, simply prepared and served with black truffle butter.... Well, maybe stalking and landing a gorgeous double-digit bone on a perfect cast ;).

I must confess, it felt strange not holding a fishing rod for the majority of my vacation. While Hulk brooded, neglected in a corner, I wondered: When did I become such a singleminded fly fisher girl? I used to be a well-rounded individual with all sorts of diverse interests and hobbies. Then I realized that ALL my vacations for the past 3 years have been centered around just one thing—fly fishing. So naturally, it made sense that I was out of sorts when I couldn't fish every day (or even every other day). Reminder to self: There is more to life than fly fishing ;).

But despite the rain and wind, Shannon, Doug, and I took kayaks out one morning, attempting to reach a nearby island (it was further than we thought!). In the afternoon, Kat and I tried paddleboarding for the first time which was great fun and somewhat challenging in the choppy waters. And despite dark ominous clouds and 30 mph gusts, Shannon and I fished the flats one late afternoon. Probably, the only way we could have spotted a bonefish in those conditions would have been if it swam right up to us and gave us the fin (or the tail). But we enjoyed our walk out on the flats, admired huge colorful starfish, all the while keeping a close eye on a nearby 5-foot + shark.

We originally planned for 3 days of fishing with the option to add more, but time was running out. We had just 2 days left and I was determined to fish if at all possible. Thursday's forecast did not look good. But I spoke with Ken and he said there was a chance for some clear weather in the morning, so Linda and I decided to take a gamble. We would fish with Abaco Lodge. Shannon and Doug were fishing different waters (southeastern part of the island) with a guide arranged through the owners of the house were staying at.

Ken told me we'd be fishing with Marty, the Crocodile Dundee of Abaco guides. From one of the oldest Bahamian families on the island, he hunts for wild boar (with just a knife ;), knows the Marls better than anyone, and is quite the character. Ken shared a few Dos and Don'ts with me: Don't get on Marty's boat without first asking permission; Don't drink the Coca Colas that are in the cooler specifically for him; Do EXACTLY as he says and you will have a great day fishing. I tried to keep an open mind...

Our second day fishing (Linda's first time bonefishing) did not get off to an auspicious start. Marty had engine problems so we had to take another boat and were late leaving the dock. We had perhaps an hour of somewhat clear skies and saw a few bones before the skies darkened and it started to drizzle.

Right before we left, Anne told us that Marty, being a true Bahamian, was rather superstitious of rain. Many believe if their heads get wet, they'll catch a cold. As the rain became more steady and black clouds closed in on us, Marty tells us we're leaving.

We donned our raingear and headed towards the Lodge. As we're speeding back, the skies opened and it poured. It rained so hard it felt like hail as it hit what little bits of us were exposed (foreheads, sliver of skin between sunglasses and buffs, fingertips, tops of our feet...)

Marty took us to a relatively dry spot not too far from the Lodge. There were no signs of any bones. Just one lone grey heron. As Marty prepares to move us to a different spot, Linda steps down from the bow and takes a spill on the slick, rain-soaked deck. She's bruised and shaken but otherwise seems okay. But there's no question now, we head back to the Lodge.

I did go back out briefly with Marty in the afternoon (Oops! I forgot to ask permission to come aboard his boat ;). He clearly thought it was a hopeless venture. And it's true, we didn't spot a single bone during the hour we were out. I would have been happy with just one. I'm afraid I can't comment on how good a guide "Crocodile Marty" is. I really didn't get a chance to fish with him. But I can say, he definitely does not like being out in the rain.

While our day was unfortunately a washout, when we returned to the house, we learned that Shannon and Doug had had a great day. The weather further south and to the east had held and they had wade fished and hooked into numerous bones. Doug landed his second bonefish, a real beauty!

Friday was our last full day on Abaco and our last day of fishing. It was just the girls today, the Julianas: Shannon and I (with David); Kat and Linda (with Marty). Weather-wise, it turned out to be a decent day. Lord knows it couldn't have been much worse than the day before. The Marls were glass calm that morning with barely a whisper of a breeze. We ran into some spooky bones early on along with an amazing school of baby hammerhead sharks, not much bigger than my forearm. The Marls are simply an incredible marine nursery!

By mid afternoon, clouds rolled in, the wind picked up considerably, and Hulk was finally tested. Perhaps it was disappointment from the previous day or knowing this was our last day, but I was a bit wound up and missed a couple of very nice bones. I really can't complain. By day's end, we were spotting bonefish from 100 ft. out (even in hazy light), stalking tailers in super skinny water, and we caught our fair share of lovely bones. I don't think I've ever seen Shannon smile as much as she did that day, catching bone after bone. She wore a perpetual grin ;). And Linda caught her first bonefish that day, too!

Later that evening, we celebrated Kat's upcoming birthday with yet another feast. Anne and Ken joined us at the house. It was a great end to a wonderful trip... Come rain or come shine. 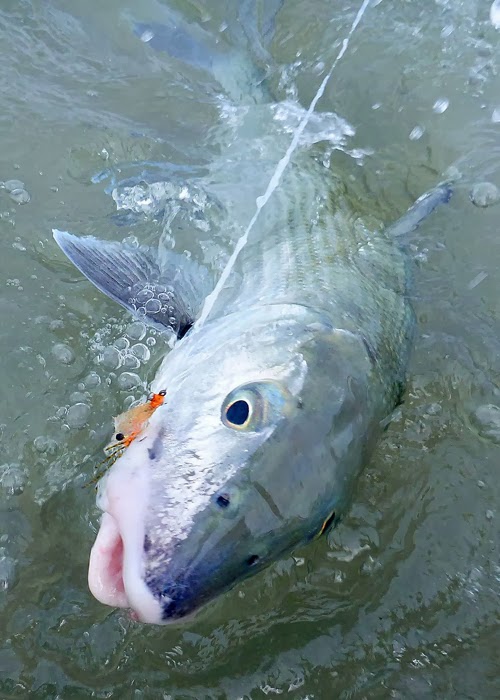 A big thanks to: