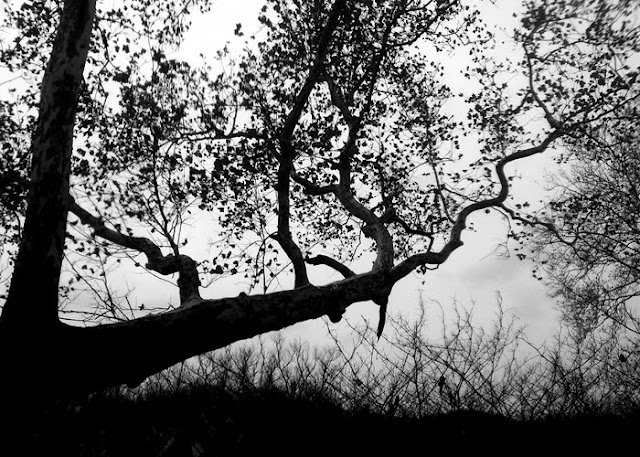 H: November 21, 2013: Flygirl itinerary: Quick stop at Tight Lines to buy some flies and tippet; Pick up spey gear and overnight at the cabin; Off to Pulaski the following morning for second steelhead trip on the Salmon River.

My first trip was about a year ago with the Juliana's Anglers. I had an amazing time and caught some beautiful fish. We had fished with guides back then. This time (being a seasoned vet ;) it was strictly DIY. But at least I wasn't fishing alone. I was meeting up with 2 other flygirls: Sam and Demetre (best friends who have been fishing together for a long time).

Sam had already been up there twice in the past 3 weeks and Demetre had joined her the previous week. Unfortunately, water levels had been really high and they mostly nymphed. But the timing for our trip looked to be perfect. The water was scheduled to go down Sunday afternoon. Time to swing some flies!

I arrived around 9am and drove to the Spey Nation parking lot. The forecast called for 50% chance of showers all day, highs in the 40s, and wind gusts up to 40 mph. For once, the weathermen were spot on. I geared up and headed upriver in search of a pool I'd never fished before. An angler I met in the lot recommended it.

Hiking along the riverbank was like hiking through a minefield of death and decay. Countless times, I narrowly missed stepping on (and exploding) large bloated salmon bodies hidden among the weeds, silently decomposing. Ugh! Last year, we had used Paul's river taxi service to get from spot to spot, so I had been spared this very special experience ;).

As I approached the pool, there was an angler already spey casting in chest deep water. So, I settled into a spot 60 feet downstream. Water was definitely quite high. 4 steps in and I was waist deep. I opened my flybox, picked one of the flies purchased at Tight Lines, and began to rig up. Unfortunately, I only had a floating and intermediate polyleader. My brand new, still-in-package, fast sinker was MIA.

I had practiced my spey casting a couple of weeks ago at the shack. But as luck would have it, I was fishing on river right. And for some reason, I had only practiced the single spey and snap T. I stripped out line and attempted to double spey... Wow, did I suck!

I don't know why it took so long, but it was a good 30 minutes of frustration before I realized it wasn't me. Well, not ALL me. It was my line and fly choice. My compact scandi + intermediate polyleader just couldn't handle the heavy fly I had I tied on. No matter how much I grunted and used my core muscles (the Buhr method), I could barely lift that fly so my anchor placements were way too low. The wind gusting 30+ mph didn't help. As I had this much delayed epiphany, who should be walking towards me but Mr. & Ms. Tight Lines—Andrew and Nancy. Small world, smaller rivers.

As we chatted, I realized I was chilled to the bone. I wished them luck (tight lines ;), hiked back to the car, and drove into town to warm up with some hot coffee. I returned 45 minutes later, body temperature a few degrees closer to 98.6. This time, I decided to head downstream and look for familiar water, water I had fished with Shannon and Paul last year.

I find it rather ironic that I have an absolute horrible sense of direction when I'm driving or walking through the streets of an unfamiliar city. I desperately need my iPhone Google maps and rely on it like a crutch. Even then, I can travel the same route several times and still manage to get lost or make a wrong turn. But put me on an unfamiliar river (even in semi-darkness), let me fish a few pools and runs over several miles, then take me back to this river a year later. Somehow, I remember and find my way back to those pools and runs. Weird, huh?

Sure enough, after hiking half a mile or so, I found the very spot where I had landed a magnificent steelhead buck last year. I changed to a smaller, lighter fly. The water was high and the pool was fairly deep. I knew it might not make it down deep enough, but at least I could cast it ;). Why didn't I pick up a sinking polyleader when I was in town? Then, the light drizzle that persisted all morning changed into a steady downpour. Why did I leave my rain jacket in the car? Clearly, I was not on top of my game today. I guess mild hypothermia can do that.

I fished for about 30 minutes before my phone buzzed. It was Sam and Demetre. They were close to Pulaski and asked if I wanted to meet for lunch. Drenched and cold and a bit deflated, I looked forward to meeting up with them. As I left the water, I swear, a fish rolled on the surface.

I joined them at Malinda's Fly shop. I met Malinda, the no nonsense, very knowledgeable owner who operates a terrific shop. We bought some flies, hung out and cast with Walt Geryk from Spey Nation, then grabbed a quick burger before heading off to fish till dark. None of us had any luck that day but we witnessed some rather surprising behavior: numerous big fish (they had to be steelhead!) rising like regular trout. To what? We're not sure.

The next day, water levels had dropped significantly and we finally had some success. I broke in my new landing glove and my 13-foot 7/8 NRX on a beautiful fish. Sam also landed a couple of beauties. Demetre had one bump but unfortunately that was it. We still enjoyed a great day on the river. Turns out everyone up there knows these 2 flygirls: Sam and Demetre. They are regulars on the Salmon river. They fish hard, but they also know how to have fun!

It was on our 3rd and last day of fishing the Salmon river, that I became a real winter steelhead fisherman. Weather-wise, it was the coldest I've ever fished in—20-something degrees. A high of 30 was expected with snow showers in the afternoon. With 6 layers on top (pretty much every wool and fleece layer I had brought with me), 4 on the bottom, plus 1 fingerless fleece glove, I felt prepared for whatever was in store for us today, or so I thought.

First stop was the Flats in the DSR (Douglaston Salmon Run). We both wanted Demetre to have the best chance to catch a fish. She took her favorite spot while Sam and I walked further downstream. The water looked perfect. It was even lower than the day before. I tied on my last black and purple intruder (lost the other to a big strong rock the day before ;). It wasn't long before I had an aggressive take. Steelhead on!

It jumped several times, took plenty of line and backing, and plenty of time to finally bring in close to the bank. It was a gorgeous fish! Well over 10 pounds. Sam walked up to help me and 2 other fishermen came by to watch. I don't know if I could have dragged it on to the bank nor did I want to. We played tug of war a few feet from the bank for several minutes. End result was a SDR. Oh, well! I was still a very happy flygirl :)). That was by far the most fun I've had in a long time! About a year to be precise.

I returned to where I started and once again swung the black and purple, getting into a fine rhythm. About 15-20 casts later, I had another strong take and fish on. I was playing it, reeling in, when suddenly I couldn't retrieve any more line. I thought my reel must have jammed. I looked down, inspected the reel and spool, checked the drag, everything seemed fine. I walked upriver to maintain tension on the line and then climbed on to the bank. I yelled/pantomined to Sam who was fishing downstream that my reel wasn't working. She made her way up, took one look at me, and told me my guides were frozen. I looked at the top guides on my rod, and sure enough, pebble-sized ice crystals had formed.

Right before our trip, in preparation, I had researched ways to prevent frozen guides. Anglers on several forums had suggested: olive oil, Pam spray, vaseline, lip balm... I had mentioned this to Sam the night before and she told me, none of them really work. I had forgotten all about it until just now :).

Well, I somehow managed to land that fish and finally get a picture of one my chrome beauties. Thanks Sam! And thanks to the Salmon river for my winter initiation.

P. S. Demetre got her chance to fight a really nice fish later that afternoon in the Meadow. I had an opportunity to cast her skagit outfit and was amazed at the ease in which it threw a large, heavy fly. I know that's what it's meant to do. I was surprised how pleasant it was to cast. I just might have to relegate my scandi to summer steelhead fishing... Hope to make another trip up this winter!
Posted by Hyun at 1:23 PM