July 23, 2013: H: It feels like an eternity since I found my slice of flygirl heaven. I've been M.I.A. for way too long! Several times I started writing but somehow just couldn't finish anything. This past weekend, I went up to the Salmon River for Spey Nation VI. I had a great time and I met several nice folks who actually read this blog. So, this one is for you guys. Thanks for the kind words and support. I'll try and bring you up to date since my last post but be forewarned, there isn't a whole lot of fishin' involved.

Yes, I closed on my fishing shack (way back in May). Hallelujah! Praise the fish gods! I drove up for the settlement, handed over a small fortune in checks, signed about 20 different legal docs, and with keys in hand…

I immediately drove back down to the city :(. Deadlines and work schedule were stupid crazy at the time.

A few days later, car packed with all my fishing paraphernalia, pillows, blankets, sheets, towels, and a celebratory bottle of 2007 Napa Cab, I drove up to my very own fishing cabin. Amidst all my excitement and rush to get there (I had appointments with the propane and satellite dish guys), I got a speeding ticket—first ticket in 16 years! Not exactly the housewarming gift I was hoping for.

The cabin came fully furnished. You would think that's a good thing—just move in and start fishing! And most normal folks probably would have. But as I took close inventory of the contents, a very strong urge to purge came over me. I jumped into cleaning/organization mode. The previous owners had left everything behind: furniture, pots and pans, dishes and cups, sheets and blankets, and enough religious artifacts to fill a small church. It was rather overwhelming going through it all. In the end, I decided to give pretty much everything away. I wanted my own things around me. I wanted to make it MY fishing shack ;).

The first evening, after a long day settling in, I walked down to the river. Caddis were everywhere with a healthy dose of hendricksons sprinkled in the mix. Truly flygirl heaven! It was too easy catching a huge, beautiful brown on a tan caddis dry fly (the perfect flyshack-warming gift!). Unfortunately it was impossible to take a picture of him without help (honestly, no fish tale). He had plenty of fight still in him and was too big to grasp securely with one hand while holding my unprotected iPhone in the other. That's one bit of fish porn I'll forever regret not having—my first fish from my home waters. Oh well!

Second evening was a repeat of the first, swarms of bugs and fish rising to them everywhere. Ahh, paradise! I caught another lovely brown (a younger sibling), again on a tan caddis dry. My river is known for its feisty wild rainbows. But that particular weekend, I guess the Browns were visiting in substantial numbers. No complaints, but I'm definitely looking forward to a 20+ inch rainbow taking me waaay into my backing :). Yet, in order for that to happen, one does need to be on the river, fishing...

Since that very first weekend, I've spent more time at Home Depot than on my home waters. I know that'll change, in time, but these past couple of months have been devoted to cleaning, purging, organizing, painting, and furnishing the shack (along with the occasional flygirl freak-out ;). It's been a rude awakening as I've come to realize how unprepared I was for this new responsibility. How much of a pampered city gal I am, clueless to the demands of shack ownership and the realities of country life (rattlesnakes like to hang out by the river?), and just how much STUFF one needs to buy for a shack! I've purchased more tools, machinery, and hardware (at Home Depot) these past few months than I have in my whole life! And there's plenty more still on the ever growing to-get list: string trimmer, tree pruner, programmable dehumidifier, a shed to put all this stuff in...

So, you want to replace a rusty old mailbox, the one with the previous homeowner's name glued on and barely discernible address numbers, with a new one? Sure, that should be relatively simple. Well, it took 2 trips to Home Depot, 3 weekends, and eventually my brother-in-law's help (and some of his tools) to get it done. When I mentioned my mailbox difficulties to my friend Richard (whose fishing cabin inspired me to search for my own), his response was, "You have a mailbox? You get mail?" That cracked me up and helped put things in perspective. Yes, I know. Forget mailboxes, I should have been fishing ;).

The weekend my sister and her family came up the cabin, I had just purchased a cordless electric lawn mower (at Home Depot) the day before. They're environmentally friendly, lightweight, and I wouldn't have to deal with buying/storing gasoline, changing the oil, air filters... For a girl who has never mowed a lawn in her life, it seemed ideal. Well, it took 4 charged batteries and hence 4+ hours to mow my considerable front yard. It was probably a blessing in disguise when it refused to start after 4 weeks.

So, a couple of weeks ago I got a new gas mower (from Home Depot). On my way back from Spey Nation this weekend, I stopped at the local gas station, filled a container with gasoline, drove to the shack, unpacked the 80-pound mower, brought it down the stairs of my deck by myself, put in motor oil, gassed it up, started the engine with the recoil (on the very first try), and cut my wildly overgrown lawn in just over an hour. Most of you are thinking: she mowed a lawn... big deal! But this city gal felt a great sense of satisfaction and accomplishment afterwards!

Okay, enough about lawn mowers (and Home Depot). How about some fishin'. Well, I've fished a few times since that first weekend. It's only been when fishing friends have visited that I've put house chores aside and escaped to the river.

My beautiful home waters are the perfect place to practice spey casting. So, how many times have I been out there with my 13-foot NRX? Just once! That's just plain silly! Flygirl, you've got to change your ways!


It was somewhat of a last-minute decision to head up to Spey Nation this year but I'm glad I decided to go. It was definitely more low-key that last year. Despite the previous day's 750 cfs release that made finding a place to cast somewhat challenging, I had a great time. And it only poured for about 30 minutes (unfortunately right in the middle of Andrew's presentation). I ran into some friends, cast a few 6-weights (looking for a home water spey rod), and watched some very good demos from 2 young guns of spey casting from the west coast: Travis Johnson and Josh Linn.

The highlight was watching Travis cast. He's a member of the Carron competition Spey Casting team and placed second at the CLA World Championships last year. I videotaped his demo on my iPhone. While watching it back in slow-mo to analyze his casting stroke, the thing that struck me was how absolutely consistent he is from cast to cast. His hands end up in exactly the same position after every cast, ridiculously long or short, snake roll or reverse single spey. Oh, and how damn tight and narrow his loops are (even casting lefty)! I met some really nice people and even won something in the raffle—a landing glove which I hope to put to good use later this fall on the Salmon river. Looking forward to Spey Nation VII! 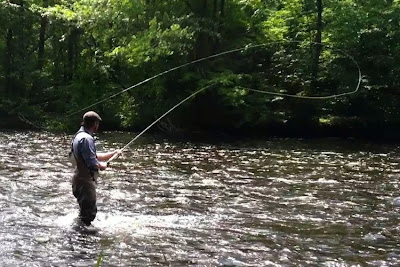 Well, I think I've finally chilled out and I'm less stressed about the shack. I will get through my to-do list in good time. While my immediate home waters are now getting a bit too warm for trout fishing, there's still bass and other species to pursue or nearby cooler waters to fish until the fall. Meanwhile, I'll never tire of sitting out on my deck, quietly spying on a doe and her fawn walking along the riverbank, watching hawks and eagles circling high above, startling rabbits and grouse out from their hiding places in the brush, slowly learning the names of the birds with summer residences in the trees around me, or watching this gorgeous majestic river forever flow by, always moving, constantly changing. She's utterly mesmerizing! I know, I'm a very lucky girl—lucky to have found her piece of flygirl heaven :). 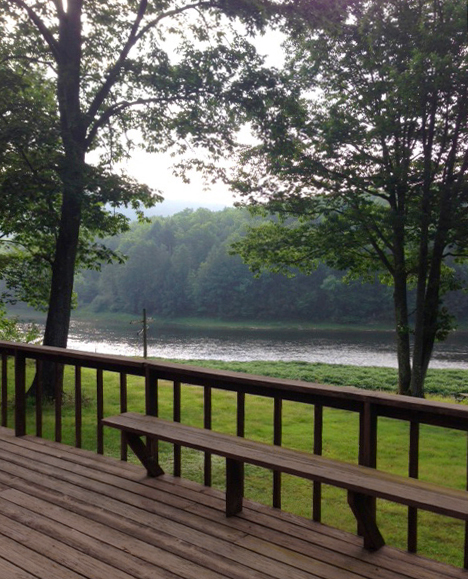