H: July 16, 2012: Just returned from my very first spey clave this past weekend: Spey Nation V in Pineville, NY on the Salmon river. I had a great time! In fact, such a great time, I have no pictures to show for it. I was too busy trying to keep up with the easterncaster. He and his FFF buddies from D.C. (John and Lee) were on a mission to demo as many spey rods as possible. It actually worked out well. Three or four of us would take rods down to the river to cast. After a while, we'd switch and try someone else's rod. By the end of the afternoon, I had cast at least 9 different spey rods (6 to 8-weights): a couple of Sage Ones, an Echo 3, some Burkheimers, T & Ts, a Beulah, and a Scott.

Before Spey Nation, I mentioned to Craig that I doubted I'd be able to tell if one rod was better than another for me, since I'm still such a spey baby. Craig's response was that everyone has some Goldilocks in them, no matter what their skill level. So I tried to channel my inner Goldilocks ;)... True, spey rods are a bit more difficult to gauge than the temperature of porridge or softness of beds, but it turned out I had definite opinions about some of the rods. Of course, so much is dependent on the lines they are paired with.

At one point, I switched rods with Lee. He had an 8-weight Burkheimer with a skagit sinking tip and heavy fly on. I've never cast a skagit line before. Needless to say, I hated it. But I knew it was the line and my inexperience with it rather than the rod itself. I have since learned that with skagit lines, you need to slow down your casting motion. Of course I was doing the exact opposite–heavy line, exert more power and speed. There was another rod I tried. After the very first cast, it was obvious it had the wrong line on it. It just felt soooo wrong! Craig said the head was too long. With the right line, who knows, the rod might have been sweet. What's surprising is that some supposedly knowledgeable rod rep sent that rod out to demo with the wrong line on it. At the end of the day, my favorites were the Sage Ones and the Echo 3.

Besides the opportunity to cast as many spey rods as your heart desires, there were some great presentations at Spey Nation. I learned that Mr. Simon Gawesworth gives even better demos in person ;). He's such an engaging speaker and natural teacher. It was a good thing they broke for lunch afterwards because he would be an extremely tough act to follow. I also enjoyed Topher Browne's demo–very cerebral, but unfortunately, he was hard to hear at times. I also wished he had done more casting. He made it look truly effortless–his casting stroke epitomizes efficiency and economy of motion. Tim Rajeff supplied the comic relief. When he started casting a rod rigged with 2 reels, 2 lines, and 2 flies, I laughed so hard I almost peed my pants! But I would have liked a bit more spey casting substance.

Afterwards, I played tourist with the easterncaster. We drove to Selkirk beach on the shores of Lake Ontario. It was quite lovely. Almost felt like you were at the ocean... 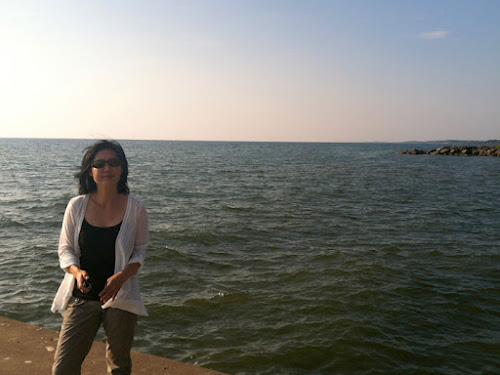