A Reel Comedy of Errors

H: May 26, 2012: The 2 flygirls' second fishing trip of the season together was this past Memorial day weekend on the Beaver Kill. On the drive up we made a "quick" pitstop at a service area on Rte 87 for coffee and breakfast. Big mistake! It took over 25 minutes to get our fast food at Dunkin Donuts and I had to make some illegal maneuvers to escape the heavily congested parking lot. We finally got back on the road about 45 minutes later and ran straight into heavy traffic. We weren't the only ones leaving town for the long weekend. Luckily, the traffic subsided once we hit 17.

We reached Roscoe just before noon and headed straight to the river. We drove along old 17, looking for a new fishing spot to try. We found a nice one--Cemetery pool. There were 2 other cars in the parking area and some anglers were coming out as we pulled in. They said it had been slow that morning but there had been some cornutas (bwos) on the water.


Cemetery pool was a cool spot. You have to walk down a path completely surrounded by dense and tall vegetation to get to the river. We walked upstream, just below the fast water. I practiced spey casting while Josée worked on her double haul. We practiced and fished for almost 2 hours before deciding to grab some lunch and check into our room at the Reynolds House.

We've driven by the Reynolds House a few times before, marvelling at the gaudy paint job that matches the Sunoco gas station next door and the large wooden fisherbear standing guard on the front lawn. It was the only decent accommodations we could get on short notice. Lou, the owner was very friendly when I spoke with him on the phone. In person, he was even more gregarious. He and Sue are certainly in the right line of business. They seem to truly enjoy meeting and socializing with the anglers who stay at their establishment.

Our room was on the third floor and hot as an oven but it was clean, quiet, and thankfully the a/c worked well. We grabbed a bite at the Diner and relaxed on the porch before getting ready for the evening's fishing. We made a stop at Catskill Flies since Josée's fly boxes were nearly empty. I think she had about 40 flies in her possession compared to my 200. Little did I know, she'd be spending $3,000 at the fly shop that day! ;)

It turns out the shop charged her card $2,989 rather than the $29.89 she actually spent on flies and a loop. They called her the next day to inform her about the error. They must have been stunned when they tallied up the previous day's sales–at least until they realized their mistake. Josée was very disappointed. She thought they had called to tell her she had won their monthly raffle, a pair of Simms boots.

We went back to Cemetery pool and grabbed our spots from the afternoon. I caught a beautiful rainbow sardine shortly after we arrived, but the real action didn't start until 8 pm or so. The variety of bugs out that night was overwhelming: March browns, stoneflies, isonychias, a few drakes, sulphers, 2 different types of bwos(?), and others I was not quite sure of. I'm tying on different flies, one after the other, and unfortunately lose a nice fish to a poorly tied clinch knot. Few things are more aggravating than seeing those dreaded tell tale pigtails :(

Josée had one fish consistently rising right in front of her. I could tell she was getting annoyed and was determined to get it. While looking for more rises, I hear Josée mutter something under her breath. I looked over and she had a fish on. Yeah!!! I also noticed that she was fussing with her line and her rod tip was dipping precariously low. Having recently lost some really nice fish, I REALLY wanted her to land this one. So, I started coaching her (Craig's influence, I'm afraid :).

I shouted upstream, "Keep your rod tip up. It's too low." Josée raised her rod but then lowered it again as she fussed with her line.

Josée shouted back, "I've never put a fish on the reel before."

"What? You're kidding me, right?" I exclaimed disbelievingly. Surely she's landed a fish using her reel, at least in Montana...

"No, never!" she yelled. She struggled again with her line as the fish took off on a nice run.

I walked upstream beside her and noticed that her line was bunched and tangled around and inside her reel. When the fish had taken off, there wasn't enough drag to prevent the reel from overspooling. We attempted to undo the tangles and managed to free her line just as the fish took another run.

"You should tighten the drag on your reel so that doesn't happen again" I said.

"I don't have any drag on my reel" Josée responded.

"What? Of course you have drag" I replied. "Let me take a look."

Well, I inspected her reel and sure enough there was no drag mechanism. What the F!? How did I not know this? We've only been fishing together for over 2 years now. So much for my acute powers of observation.

"Wow! You really don't have drag" I said rather incredulously.

"I told you so... The guides were surprised, too" she replied. Josée went on to explain how she's been through this very same scenario with the various guides we had out in Montana.

Fortunately, the poor fish was now getting tired or at least tired of us yapping about drags and reels ;). It started swimming towards us and Josée starts stripping in line like crazy.

The fish is at least 50 feet away and my net is on my back within a second's reach. But I decide to get it ready, anyway. I'm not taking any chances. At this point, it's quite dark out. I can see the line moving closer but I can't make out the fish until it's about 10 feet away. I reach out with my net... Success! Josée's fish, landed. Hallelujah!!!

Josée's shark was a lovely brown, around 15 inches. As we walked back downstream towards the parking area, neither of us could stop laughing at our comedy of errors that night. One thing's for sure, Josée is seriously thinking about getting a new reel.

The 2 flygirls caused quite a commotion at Cemetery pool that night. There had been 4 other guys fishing downstream of us. They all left by the time we finally landed this fish. They must have thought we were either completely nuts or complete novices.

Well, Josée now understands why I have little desire to go back to the Farmington river any time soon (sorry, Antoine). What performance enhancing drugs are in these famed Catskills waters? And I thought it was just the Delaware :). We celebrated later that night with a huge pasta dinner at Raimondos. 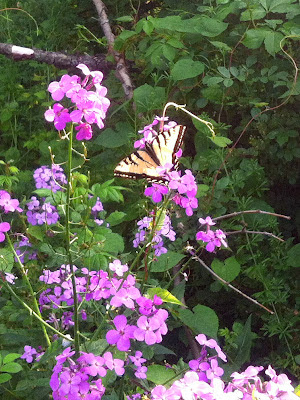