No More Excuses... Just One Regret

H: Okay, I'm calling it—I've officially hung up my waders (next to Josée's : ) for the season. And what a great season it was! 9 days fly fishing in Montana on 7 different rivers, lakes, and creeks (see: Story Lake, Montana Fish Porn, DePuy Spring Creek, Fishing Yellowstone National Park, Hyun…ready to fish the Boulder River). 2011 was a year of several firsts: cruising for gulpers on Hebgen (Happy Hour on Hebgen Lake), night fishing for monster trout (Mice Fishing the Farmington), and chasing elusive false albacore out in Montauk (Bring out the Bikinis!). And last but not least, our 7(?) minutes of fame on WNPR's Where We Live: Gone Fly Fishin radio show. Certainly, no sophomore slump.

So, 6 months of fishless days loom ahead. I'm naturally a bit saddened but also partially relieved. There are so many things I've put on the back burner. "I'll get to that when the fishing season is over," my friends, coworkers, and family members have heard me say over and over again. Now, there are no more excuses. I can finally
That should keep me out of trouble, hopefully. No more obsessively checking weather.com or wunderground.com for the weather forecasts for my favorite fishing spots (lord knows they are wrong 50% of the time anyways), or following the ups and downs of my favorite rivers at waterdata.usgs.gov/nwis or reading the daily fishing reports before reading the local, national and global news. Who would have thought these would become my most visited bookmarks?

At some point during the season, I became a fly fishing junkie : ) I'm sure I'll suffer from fly fishing withdrawal over the winter. When the shakes become real bad, I guess I'll just have to bundle up, go outside and cast...cast...cast! Here's hoping for an early spring.
Posted by Hyun at 12:54 PM 4 comments:

H: Writing this post, probably the last fishing report of the 2011 season, is rather bittersweet. It was a solo trip back to the Farmington river in CT (Josée has long since hung up her waders). "Falling back" the night before allowed me an extra hour of sleep. I leisurely left the house at 8 am, scraped the frost off the windows of my car, and set off to (hopefully) catch my last trout of the season. The plan was to fish till mid-afternoon then drive back for a family dinner and catch the tail end of the Giants-Patriots game : ) As I drove through Putnam county into CT there was quite a bit of snow still on the ground and I spotted more and more felled or partially dismembered trees--casualites of the historic October nor'easter the week before. I wasn't sure what shape the river was going to be in when I got there... 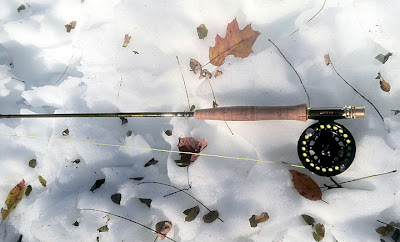 Ovation pool was my destination. There were lingering mounds of snow in the parking lot, broken branches and debris strewn everywhere, and no other cars in sight. A large tree had been uprooted right beside the path down to the river. It didn't look like the handiwork of a snow storm, but rather as if another hurricane had passed through. The river was high but looked safe enough for me to cross to the little island and access the pool upriver. It was still too cool and early for any bug activity, so I decided to nymph and practice once more with my 8 wt. switch rod.

I tied on the exact same nymphs I had used on the Beaverkill: a big momma pheasant tail and a tiny baby pheasant tail dropper (very technical, I know ; ). It still amazes me how easy it is to cast distances and mend long lengths of line with a switch rod and shooting head line. I was able to cover a lot of water, quickly. It wasn't long before I had my first fish on, a good sized one, too. I could actually feel its movements at the end of my line. But with the 8wt. rod, I landed him all too quickly. He was my largest fish of the season on the Farmington, a 20-inch brown trout. Unfortunately, he wasn't very attractive--a mousy gray brown--lacking the fiery red markings and golden hues of the Beaverkill brown caught 2 weeks ago. (Hmmm, when did I become such a trout snob?) I tried to take a decent photo but with my line entangled in my net cord, cold hands, and the size of the fish, I wasn't very successful. I reluctantly post the picture below. As I released him, I couldn't help thinking: Damn! It would have been so much fun to land him with my 5wt.


I nymphed a bit longer before losing my rig to a submerged rock. I thought I would try out one of my sinking tips and swing a streamer, just to get a feel for it. But as I removed the floating tip from my line, a few small blue wing olives flew by. They were a sight for sore eyes (and a sign from above?). I realized I was DONE--done with nymphing and done with my switch rod. I practically ran back to the car and assembled my 5wt., excited as a school girl. Then it hit me--I was so focused on practicing casting my new switch rod (practicing at the expense of fishing) that most of the joy was being sucked out of my time on the river. It might have been a different story if I was trying to catch salmon or stripers. But manwomanhandling trout with it, even a 20-incher, was utterly unsatisfying. A wise fly fisherman I know recently said, "...while you're fishing is not the time to be practicing." There's truth to that. There's a time to practice and a time to fish. It was time to fish!

I tied on a #20 bwo and proceeded to dry fly fish. It felt like ages since I held my 5wt. and my overhead cast was rusty, but I didn't care. It felt so light and free. I couldn't spot any rises so I blind casted into the slightly faster water above the pool. I started focusing on the fishing: placing my fly in potentially fishy seams, getting the drift just right... It was a splashy rise and agressive take--I set the hook instinctively--fish on! I'd forgotten the simple joy of watching a trout rise and take your fly. And I could feel her every shake and shimmy on my 5wt! She was a lovely 12-inch rainbow but she slipped out of my grasp before I could take her picture. I guess she was camera shy. Oh well... she certainly made my day and possibly salvaged the end of the season.
Posted by Hyun at 1:39 PM No comments:

Not Another Fly Fishing Blog!

H: There's a new blogger in town, our good friend and fly fishing instructor, Craig Buckbee. It's rather ironic because just the other day, he mentioned a post he read on the average angler (a blog written by a local NJ/NY fishing guide) about the overproliferation of fishing blogs. I decided to check it out for myself: Fly fishing blogs have "jumped the shark".

Yes, there's a sh*tload of fishing blogs out there of varying quality. As I write this post, 20 new fly fishing blogs have probably been created somewhere in the blogosphere ;) Blogs in general are now as ubiquitous as the local Starbucks. I recall recently reading an online stat estimating over a hundred million blogs in existence--and that's a conservative estimate. Hell, I wouldn't be surprised if my 9-year-old niece, Ally, follows in her aunt's footsteps and starts a blog in the near future (with her parent's supervision and support, of course). And I hope she does, because that would mean she has discovered a passion for something and wants to share it with others.

Too many blogs? Too much content? Lord knows, no one has the time to read or discover even a fraction of the multitude of fishing blogs out there. I know, I certainly don't. There's a lot of garbage to rifle through but it's worth it to find the gems and one woman's garbage is another's treasure. I find that the blogs I return to and read regularly have a clear voice that somehow resonates with me (whether funny, knowledgeable, genuine, inspiring, or just quirky and original). As the average angler notes, blogs take a lot of time and work to keep up. Hence many of these blogs will eventually fall by the wayside. The ones that survive will do so because of the passion and dedication of the blogger and the quality of the content they publish.

So, where was I? Yes, back to Craig's new blog. As previously mentioned in our post: The Beauty of the Switch Rod, Craig is a certifiable casting geek (FFF certified, that is ;). But he's far from a computer geek--still getting his bearings on Blogger. His site, easterncaster, is a work-in-progress and was originally intended as a simple online business card. But who knows where it will lead. Blogs can take on a life of their own. While still in its infancy (2 posts :), we have high hopes for it, wish him lots of luck, and look forward to reading—yes, another fly fishing blog!
Posted by Hyun at 2:15 PM No comments: