A Fall Practice Session on the Beaverkill

H: October 22, 2011: Well, a quick switch rod practice session on a nearby river turned into a full day of fishing. It was such a fine, crisp autumn morning, I thought, why not head up to the Beaverkill and continue practicing—it's only another 1.5 hour's drive :). Well, the drive alone was worth it. I grabbed a bite at the Roscoe diner, renewed my NY fishing license, then headed to the river. I hoped to return to one of the spots that Craig showed us at the beginning of the season. I followed old Route 17 as it wound its way along the Beaverkill. As I drove through underpass after underpass, things started to look familiar (my friends will vouch for my excellent memory—it's like an elephant's ;). I remembered Junction Pool, Carin's Pool, Painter's Bend, etc. The Beaverkill was more beautiful than I remembered (I was a bit harsh last time), even with the foliage being slightly past its peak.

I parked under an underpass and walked to the river. It felt both familiar and fishy. Plus I would have this stretch all to myself. With no bugs or rises to be seen, I decided to nymph with my 8 wt. switch rod. Yes, I know, it's completely overkill for catching trout (unless it's a supersized one on steroids). But honestly, I wasn't even thinking about catching fish. I just wanted to practice my newly learned spey casting skills. 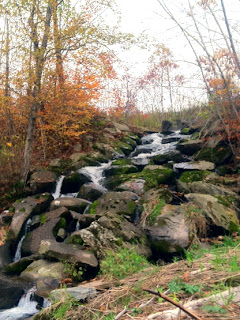 As the river was flowing from my left to right, I started with the double spey, focusing on not overpowering my anchor set and attempting to mimic the casting motion that both Andrew and Craig had taught me. The hours flew by: walking, hiking, scouting, walking, crossing waterfall, hiking, walking, scouting, stopping, wading, rigging, casting, setting anchor, casting, mending, stripping, setting anchor, casting, cussing at my incompetence (my close friends will also vouch for my cussing--directed solely at myself and usually PG-rated ; ) Come on! Better acceleration... rod tip higher, dammit!... smooth level motion... quicker stop... Jesus, girl! Relax the death grip...

After about 2 hours of double spey and lots of walking (and swearing) thrown in, I decided to find a shallow spot where I could cross the river and practice the snap T. I drove upriver and found a nice calm shallow riffle. There were a couple of other anglers there but I didn't care. I crossed and proceeded to practice. After about 15 minutes, I felt I was getting the hang of it and started shooting line. As I began stripping in line to execute another snap T, I felt weight at the end of it—it was a fish! It had hooked itself at the end of the swing. I landed him in seconds. It was embarassingly effortless (small fish...big rod :). He was a lovely brown. I practiced for another hour or so before calling it a day and heading over to the Riverside cafe for a well-deserved beer.

H: With my new 8 weight, 11 foot Access switch rod, loaded with the Rio Scandi Short VersiTip line I picked up last week at Tight Lines, I am hitting the river to practice. Watch out trout! (and trees and rocks, birds and frogs… ; ) And thanks to Andrew Moy for a great lesson.
Posted by Hyun at 6:57 AM No comments:

H: October 9, 2012: With forecasts calling for 80ºF weather and sunny skies, Josée and I knew we absolutely had to be outdoors and fishing, even if all we could squeeze in with our hectic schedules was a day trip on Sunday. Initially we thought of returning to the Beaverkill. Water levels were miraculously good and we've been meaning to go back since our first trip earlier this spring (see: Hunting Instincts). Plus, the Farmington on Thursday night was over 2,000 cfs due to a massive dam release. But when I checked again Friday, the DEP had decided on a sudden reduction and the water was dropping faster than the stock markets of late. That plus a Giants' home game on Sunday afternoon conspired to bring us back to our own "home waters".

Except for a slight case of car sickness (Sorry Josée! Next time, we'll ditch Evil), the drive up was an absolute pleasure. The leaves were beginning their annual metamorphosis into the golden yellows and vivid orange reds of autumn. I thought, even if the fishing isn't productive, I'm glad to be out on such a glorious Indian summer day.


We were both a bit apprehensive about returning to the Farmington since our appearance on WNPR. The week before, Antoine had said to me half-jokingly, "We are famous. Everyone who fishes the Farmington knows who we are now." Since the program aired, whenever he's been on the river, he has been approached by anglers who had listened to the broadcast. Most people were positive and said they enjoyed the show. But apparently a few had actually told him angrily that the river is now becoming much too crowded as a result. Jeezz, lighten up! The river is big enough for all to enjoy. With our new-found celebrity in check we headed to Greenwoods to fish with Antoine before his afternoon trip.

Our greatly anticipated arrival at Greenwoods was heralded by a 20-gun salute and a 2-car police escort ; ). OK, actually, some idiot was firing their gun not too far away and 2 local police cars had stopped by, trying to locate the source of the commotion. I'm not sure if the shooter was target practicing or trying to kill and/or scare every living creature within sight/sound but the loud gunshots went on for some time--not quite the peace and tranquillity we were hoping to find on the river.

I suited up first and entered the river, passing several anglers on the bank. Josée followed shortly after. As she walked towards the river, she overheard the anglers talking about us, "...these girls just love to fish..." She came up behind them, said a quick hello, and headed over to join us. The whole time we were fishing, I could feel their eyes on us. It was a bit unsettling. Can't a girl just fish in peace? Not that a lot was going on--there was very little bug activity and not a single rise spotted. To distract ourselves, we shot some video footage of each other fishing. Josée, it turns out, is a master of sound effects. We're not quite ready to post video yet, but very soon... Stay tuned.

We moved upriver in hopes of more activity and to escape inquisitive eyes. Perhaps we were beguiled by the warmth and light of an Indian summer day--but for some reason, Josée and I were determined to dry fly fish, even though there wasn't a rise to be seen or coaxed. In fact, Josée did not change her fly once, all morning. For that, I blame the languidness of a sultry summer's day. After a few hours enjoying the beauty and solitude of a secluded fishing spot, we decided to break for lunch.

After a leisurely lunch we returned to Greenwoods. The late afternoon held more promise--caddis were starting to emerge and the fish were more active, just not in the way we wanted. It's the start of spawning season and there were some spirited displays of aggression. If only that aggression would be directed towards our flies and not other trout. Antoine was done guiding so we joined him in the parking lot for beer o'clock" (borrowing his terminology). Josée and I both took turns casting his new vintage bamboo rod, a 7-ft. impregnated Orvis Battenkill--very sweet. He better keep an eye on it or it might go missing : ). And who should show up while we're casting but Bert Darrow, Pres. of TGF. He brought out his beautiful custom bamboo rod to show us. I can't recall the name of the rod maker but he's a friend of Bert's and apparently only makes a couple of rods a year. I had a chance to cast it as well--faster action than the Battenkill, incredibly smooth. I must admit, I'm getting a bit spoiled--casting bamboo rods, celebrity status... I can't let this get to my head ; ).

Well, before I end up writing a novel, I'll end it short and sweet. As the moon rose and the sun began to set, caddis were out in abundance and a couple of small fish were porpoising out of the water chasing emergers. But Josée and I still had on dry flies--caddis this time (yes, Josée finally changed her fly). The action lasted for around 10 mins. I don't think anyone at Greenwoods caught a fish. As I stepped out of the river grumbling about how bad the fishing had been, I recalled what I had thought earlier that morning: ...even if the fishing isn't productive, I'm glad to be out on such a glorious Indian summer day... Which was true. But that was exactly the problem--we had fished like it was a summer's day... Oh, well. 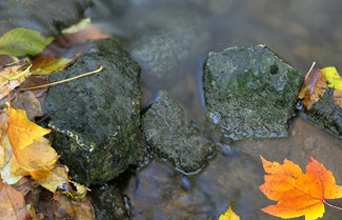 While the 2 flygirls were in Montauk chasing albies, our friend Craig Buckbee (FFF certified casting instructor) was participating in a fly fishing master class in Sandy Hook, NJ with Jim Valle, hoping to catch some stripers in the process.

I like his quote regarding Gunnison Beach and using barbless hooks ; ) Ouch!
Posted by Hyun at 1:48 PM No comments: