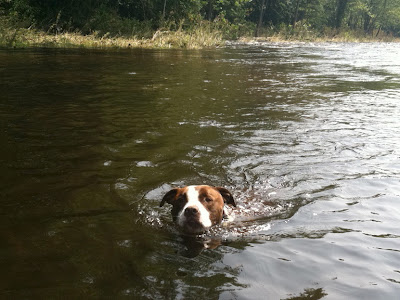 J: What do 2 girls do on a Labor Day weekend? They leave town to go fishing and that's exactly what Hyun and I did!

We went to New Hartford to fish once more the Farmington River. We left early on Saturday am as Hyun is an early bird! 7 in the morning we were on the road armed with our usual 2 dunkin donuts cafés. I guess we tend to boycott Starbucks : )

Got to N.H. by 9. Since Evil Kenevil was driving we made it there in no time and experienced a few G-force along the way and some G-negatives as well. My friends, one has not lived until one drives with Hyun!

Our first stop was the Upcountry store. Now, that the parking lot was utterly empty gave us a sign of the state of the river as there is always a few cars parked while their owners shop for something: un-needed flies or un-needed anything but buy anyway because, well, why not? Anyway that's the way we do it. This time was no different, we both bought what looked like a wet canard (no kidding). Unneeded and un-useful. But we tried it anyway since we were told by Grady that it was what the poissons wanted in a time of despair. I'll be wearing it as a hair piece from now on as there is no way I'm putting this chicken looking fly in my already too full of a box!! Hyun will probably make an earring out of it, I'm sure : ).

So, after dropping some pesos on un-necessary stuff we drove to the river. Again, no cars in the parking lot. Hmmm, we uttered. NOT good! Where are the usual suspects, we asked? Where are the regulars? The gents who know the river by rocks and by tree trunks and by the poissons individually? If the fish had names they would know their names, I swear!

They we not there. We were on our own with a river that wanted to spit you out if you were bold enough to get in.

But, we were bold enough! We got in and stayed very, very close to shore.

The water was fast and furious and reddish dark; trees were uprooted; the path was under water; small islands were created with a river on each side. Things had change incredibly. But by some miracle after a few hours of hopeless casting, Hyun caught a fish. We were very happy.

We also tested Ovation. We had to change location as we were getting frustrated. There, we met Davi, a pitbull mix, a teddy bear of a dog. He was there with his master. He would sit by the shore while the man (master) caught a fish a minute. He was using live worms... Not cool but he was a lovely man. We liked him and more so his dog! We did not catch anything. But we both sunbathed on the polished rock bed. It was very hot and humid on Saturday. The cool water was rather refreshing and relaxing.