The Beauty of the Switch Rod

H: This past weekend, I attended a free switch rod class offered by my local Orvis store in NYC. I was very happy to hear that the class was being taught by Craig Buckbee, one of our favorite fly fishing instructors, a serious casting geek, and a really cool guy. We met at the 106th Street entrance to Central Park by the Harlem Meer. There was a good turnout of 7 anglers, several of whom brought along their switch rods.

For a trout girl, who's been exclusively casting her 5 weight rod with floating line for the past 2 years, it was an eye-opening experience. Casting longer, heavier, switch rods with shooting head lines is a completely different animal, all together. Awkward and heavy? Unfortunately, yes. Extremely powerful and versatile? Yes, yes, yes!!

When Craig had mentioned Spey Nation earlier this summer, I thought: wait till you became a more experienced angler before attempting to learn a whole new casting genre. Boy, do I regret that decision now. Lesson learned in hindsight: you need to continually push yourself if you're going to become a better angler. Fishing the same rivers with the same outfit will only get you so far (not that there aren't a thousand things still left to learn there). But trying out new techniques, new equipment, in different environments, and going after different quarry is what's going to take you to the next level. 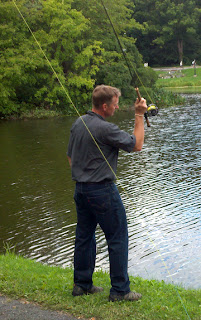 Craig started off by reviewing the basic roll cast. I got to use his 11-ft, 6 weight Sage Z-Axis switch rod. It was remarkable! With a switch rod and a shooting compact Scandi head, making long distance roll casts was truly effortless. And I never even thought of hauling with a roll cast, which Craig demonstrated. I've only just started trying to haul in my regular overhead cast. I briefly tried out another classmate's 7 weight switch rod. His was loaded with a regular floating line—what a difference—it's all about the line! Craig directed us to the Rio website which has some great information on how to choose the right line for your switch or spey rod: http://www.rioproducts.com/spey-lines.html

We then moved on to a Circle spey, Snap C/T. I couldn't make the crisp tight loops that Craig demonstrated and my anchor didn't always end up where I wanted, but I know I'll get the hang of it with more practice. I can't wait to try it out on an actual river.

As for casting overhead with a switch rod, Craig demonstrated a roll cast pickup: a high roll cast (above the water) into a traditional back cast followed by a forward cast, shooting line. I've only cast a rod heavier than a 5-wt once before, the one time Josée and I attempted striper/bluefish fishing. Jon Fisher of Urban Angler had invited us out to Jamaica Bay. Boy, were we out of our element—2 novice flygirls, still wet behind the ears, attempting to cast 9- and 10-wt rods with large saltwater streamers into a stiff wind. We could barely get a 30 ft cast off after numerous false casts. Looking back, it was a miracle nobody lost an eye or got hooked ;)

Needless to say, my first attempt at overhead casting a switch rod was less than spectacular. I was afraid I'd overuse my bottom hand and end up swinging my rod like a baseball bat. I think that's exactly what I ended up doing, since I put an unintentional curve into my line on the forward cast, using both arms as a lever but not in a good (straight line path) way. But I was able to cast about 50 ft of line with just one back cast.

I need to seriously hit the gym and pump up my casting muscles ;). I consider myself to be fairly athletic but I know I won't able to overhead cast an 8-wt switch rod with a heavy shooting line all day long, even 2-handed. However, I will definitely be able to spey cast one for most of the day. I guess that's the beauty of the switch rod.

Note: Attempting to take their game to the next level, the 2 flygirls will be going striper fishing out in Montauk in a couple of weeks. And maybe even try salmon fishing up in Pulaski for the first time, later this fall. Wish us luck!
___________________
H: Since I wrote this post last year, I've been working hard to improve my spey casting. During this time, I've come to realize a few things. I believe it's easier to learn to spey cast with a real (12 ft+) spey rod. The longer heavier rod requires better technique and you can feel the rod load better. With a shorter switch rod, you're more likely to blow your anchor if you overpower the cast and you're more prone to pushing with your top hand. With a bigger spey rod, you really need to power your forward cast with the lower hand or your line just won't go very far and your leader may not fully unfurl. You'll also quickly realize the importance of getting your core muscles involved during the cast, not just your shoulder and arm (otherwise, keep that bottle of Advil handy :).